Who is Norm Shealy?

In the Spring of 2009, at the invitation of Fowler Jones, Ph.D, Greg and I headed out on a road trip to Kansas City to give a talk on intuition at the Psychic Studies Institute. On the way there, we took a detour to Springfield, Missouri, to visit an old friend, Norm Shealy, MD, PhD. We took these photos of his inventions at his farm.

For those of you who don’t know, Norm is the founding president of the American Holistic Medical Association, the founder of Holos University Graduate Seminary, author of Energy Medicine (and 30 other books including my favorite, the classic, 90 Days to Self-Health). 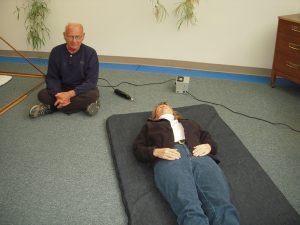 Norm is a pioneer and expert in pain management. For his inventions, he holds 14 US patents in the field of medical science. He will tell you that every one of his creative ideas came to him from his guides.

For this newsletter, we interviewed him on the ways he accesses intuition for both healing and creativity.

When we asked Norm how he accesses his intuition on a regular basis, here is what he said: 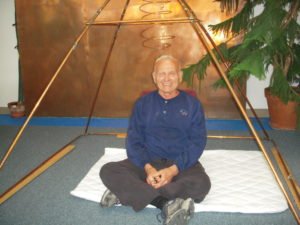 Then, in 1972, after having my first past life regression, I had an out of body experience. Not too long after that I began hearing voices. One night I was hearing 14 different voices. Eventually, there was a distinct voice that I came to identify as my teacher. He once said to me, “Where did you think you got that image that just came to you yesterday?” And I said, “I thought it was mine.” And he said, “I put it there for you to work on it.”

As far as I can tell, I am just a receptacle of information from this, and possibly other, teachers. I get an idea, an image, a thought, an understanding, and I have been told that these are messages from my guide teacher.

My guide and I have debated this over the years. Once I said to him, “Twenty years ago you said that I would someday channel you. What happened to that?” And he said, “What do you think you have been doing all these years? You have been channeling me all this time.” 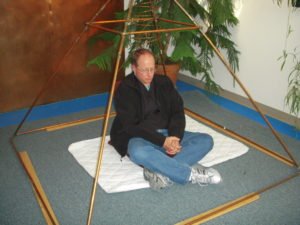 Here is another example of accessing information that I did not have from this current life. In 1966, I started putting needles into patients’ pain and hooking up an electrical stimulator to stimulate those points. I would just say to my patients that I was doing a little Chinese acupuncture. Then, when the first Chinese medical delegation came to the US, they came to visit me because they, too, had begun to use the electrical stimulation of needles the same year that I had. They had not done that before. I have to assume that the knowledge of acupuncture had come to me from a previous life in which I had done acupuncture.

A lot of things come to us from past lives. Other times the information just comes, through intuition, such as the idea to use electrical stimulation. 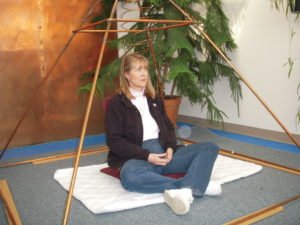 Anne Salisbury sitting in Norm Shealy’s copper pyramid with a spirit orb of light at her side.

The copper pyramid with crystals attached to the top of it came to me as a healing device. From that I developed the Shealy Stimulator. Then, I took the idea of the copper pyramid and converted that to the RejuviMatirix. This is a 2-inch thick mattress topper of copper and a pound of crushed sapphire crystals. This is used to rejuvenate dna. My guide told me to put these crystals over the heart to avoid heart attacks.”

Listen to the Rest of the Interview

Norm explains about his amazing healing oils and gives his daily routine for being more intuitive and connected to guides download the full hour audio.

Learn More About Norman Shealy, MD, PhD and his Products