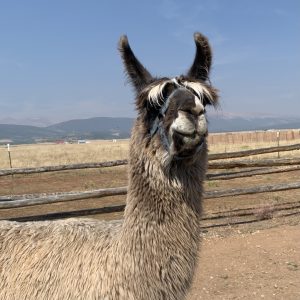 For the last three years, Donzie lived at a rescue facility with three other llamas. Recently the others were adopted out leaving Donzie all alone.

“How is Donzie feeling?” the rescue center wanted to know. “Is he content with his situation?” We telepathically communicated with Donzie and listened for his answer. “Not really. I would like to be around more of my kind. People are fine, but sometimes they just don’t get me. They don’t get my jokes. They are inside jokes for llamas.”

“That’s true. We don’t get him” Kimberly, the director shared.

“We also need to trim his toe nails and groom him. Can he let us do that?”

Anne flashed Donzie an image of Kimberly’s question and Donzie quickly replied. “What would happen to me if they didn’t do that? What exactly do they want to do with my feet? I don’t care how I look. Why are they so obsessed with how I look? I’m fine with me.” 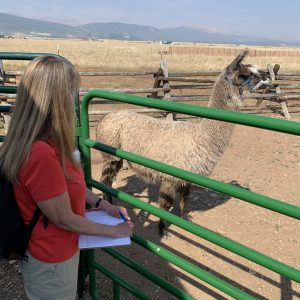 “Your feet would start to get uncomfortable and you could strain your tendons” Kimberly said. Anne showed Donzie the image of his toes curling up like elf shoes.

“I’ll wait until they get really bad and then they’ll bring in a massage therapist to help me. The center takes care of the residents.”

“This is hilarious! How did Donzie get the idea of a massage therapist?” Anne asked. Kimberly explained that a volunteer came in to give certain animals massages. Donzie is so observant and smart!

But the massage therapist does not work on animal feet. Only the staff does that. And if Donzie were in the wild, his walking on rough surfaces would take care of his feet naturally. But since he lives at the center, he needs to work with the staff.

I, Greg, started showing Donzie how to put an energy bubble around himself so he could be in his own happy world while they were working on his feet. 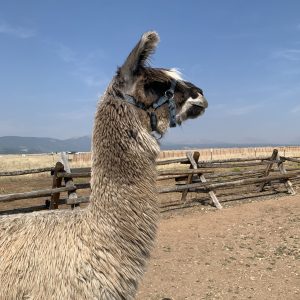 “What are the center’s plans for him?” Anne asked. Kimberly said, “He’s going to stay here the rest of his life unless someone comes along to adopt him.”

“Donzie, you could be more appealing to people who might want to adopt you and take you to live with others of your kind. Taking a bath would make you look and smell good. Getting groomed could be like getting a massage,” Anne said.

Donzie wouldn’t commit to getting groomed. Instead, he started seriously moaning.

So, Anne again showed him the image of at least getting his feet trimmed and how important that was for his well-being. “Maybe,” he responded. He was now giving in a little because he wanted the center to adopt him out to a llama family or have friends join him at the center.

Again, Anne let him know that to be adopted out he also needed to be groomed. Donzie then flashed Anne an image of wanting a birthday cake. He let out a big moan.

“Yes, getting adopted would be cause for celebration!” Anne said. “How exciting to think you could live with other llamas who get your jokes.” 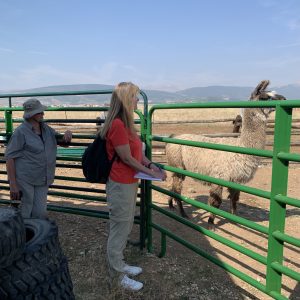 Sally, one of the volunteers, started laughing. There had been a birthday celebration at the center recently, and that must have been where he came up with that idea. He wanted a celebration, too!

So, before we left, Donzie confirmed that he would consider being groomed and manicured because he saw a possible reward in his future. He now understood why they wanted him to do certain things.

He was one smart llama to observe and request massages and birthday cake. He successfully communicated that to Anne to get his desires understood. And now that the staff and Dozie had communicated and understood each other, they could focus on their new goal of finding Donzie some llama friends!