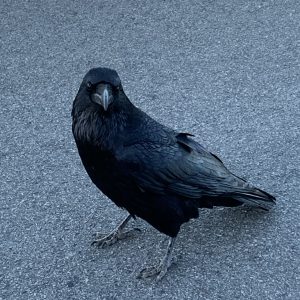 On our drive to Utah over Thanksgiving, Anne talked about how she disliked the way crows had taken over Colorado because they were often mean to other birds. She wished she could accept them and knew she had a block there.

The next morning, as we were finishing a hike in Canyonlands National Park, a Raven showed up out of nowhere and wouldn’t leave us alone. For the next 50 feet or so it hopped along the trail with us acting like it was the third person in our party. It would have been cute if Anne didn’t have her opinion.

When we arrived at our car, it circled around it multiple times. At first, we assumed it was looking for food. But there were two cars near us with four people standing there eating lunch. We could hear their crunchy potato chips and plastic wrappers. So, telepathically and verbally we told the raven to go to them for food. When it wouldn’t leave us, we amped it up and used our pet psychic abilities to flash it images that those people had food and our hands were completely empty.

That didn’t work. The raven continued to hop around our car.

Anne decided it was time to open a conversation and let go of our plan to hurry along to our next hike. She spoke out loud, “What do you want from us?” It answered telepathically, “To be friends. You are our tribe.” 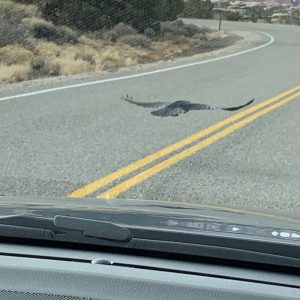 We thought that was nice and took pictures of our new “friend.” Then it was time to go.

To our amazement, the raven took off flying next to our car as we drove down the road. It kept swooping around us and landing in front of our car so we had to stop. We gave up hurrying, drove slowly, and stopped multiple times. At one stop it hopped over to the driver’s side, did a dance and warbled like a turkey. We caught that on video because it lasted so long.

After a few miles, we made it to our next trailhead and the raven landed. Greg told it, “I’m impressed you’re still with us. We are going to hike now. This has been fun.”

We watched it fly to a high tree. Nearly an hour later we returned and saw it still sitting on that tree. We started to read the trail map sign, and the raven flew down and landed on it. It had been over an hour and a half since we first met him.

During this hour and a half experience, Anne miraculously released her judgment of crows and ravens. This unique raven had opened her heart with love. 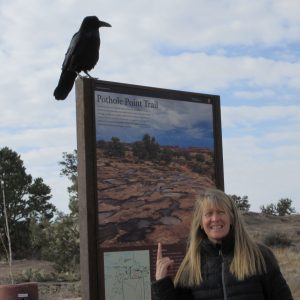 In the parking lot, Anne kneeled down and asked, “Why do you want to connect with us so much while ignoring everyone else?” It answered, “You are my group.” “OK,” Anne said. “I never thought of myself as part of a raven tribe, but I feel close to you. You’ve definitely expanded my view of family and friends. Thank you.”

Greg chimed in, “That was fun, and now we need to go.” Greg started driving us away and the raven flew beside our car for some time.

A month later, we came back to Canyonlands for Christmas. The park was mainly empty, so we were able to strike up a conversation with a National Park Ranger. Anne told her about our raven experience the month before. She said, “I know that raven and its partner who live near that trailhead. They are particular about who they approach. They are aggressive to people they don’t like for some reason, so you have to be careful. They have clawed some people multiple times because they remember their faces and cars when they return days later.

Knowing this, we drove back to the trailhead where we had met the raven at Thanksgiving to see if it might be there. As we pulled in, two ravens flew at our car from out of nowhere and landed on both sides of our car. We were happy to see them, so we got out of the car and hung out for a while. 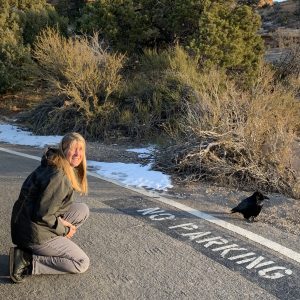 When we drove off, the one raven flew next to our car again performing the same antics of landing in road in front of us, making us come to sudden stops. It was a joy to be with it playing the same game.

This whole experience helped Anne release an old block and helped both of us expand our definition of friends and family.

So, the next time you encounter another being, like a raven, take a moment to see what it has to say. It may be bringing you great teachings and enlightenment! This raven certainly surprised us.